You don't have any saved vehicles!

Look for this link on your favorites:

Once you've saved some vehicles, you can view them here at any time.

MENU CALL US FIND US

The Defender is a Vintage Land Rover No More 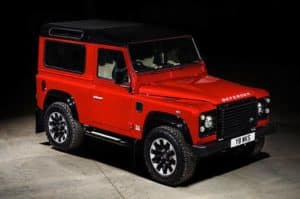 After being on the market for 67 years, the Land Rover Defender was discontinued in 2016. With the upcoming 70th anniversary of the founding of Land Rover, the Defender is making its comeback. Land Rover Princeton has all the current details on this fan favorite Land Rover model!

What We Already Know About the Land Rover Defender

Though not much has been released concerning the new model, there have been some spy shots moving about the internet. And what we can tell so far, is that the Defender will have:

Among all things, we hope Land Rover honors its classic style and function in the coming, vintage model.

Keep on the lookout for new Defender updates from us. Who knows when the next retired Land Rover model will make a comeback? Until then, browse our current Land Rover models to find the one that best suits your driving needs. Take one for a spin around the Mount Laurel roads and learn more about our models by contacting us today.

You don't have any saved vehicles!

Look for this link on your favorites:

Once you've saved some vehicles, you can view them here at any time.